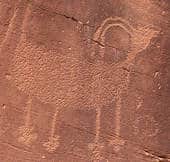 Pictographs found in the Trans-Pecos region document the presence of wild sheep in the mountains of West Texas to prehistoric times. While herds were probably never extremely large, unregulated hunting and exposure to disease from contact with domestic sheep drastically reduced their numbers soon after white man began settling in West Texas. The last of Texas’ native bighorns were gone by the early 1960’s.

Initial efforts at restocking wild sheep met with failure and were abandoned….

Desert bighorn prefer a habitat of steep, rocky terrain for escape from predators, bedding, and lambing. Bighorn zigzag up and down cliff faces with amazing ease. They use ledges only two inches wide for foot holds, and bounce from ledge to ledge over spans as wide as 20 feet. They can move over level ground at 30 miles per hour and scramble up mountain slopes at 15 mph. They are aided by cloven hooves which are sharp-edged, elastic, and concave.

Graze and browze of a wide variety of plant species serve as food. Green grasses are preferred, but when this food is not available, as is the case for most of the year in the Chihuahuan Desert, they feed on a variety of other plants, including cacti. Bighorns have a complex nine-stage digestive process that allows them to maximize removal of nutrients from their food. Coming soon…pictures & information on species of desert plants!

Characteristics and Habits of Bighorn Sheep 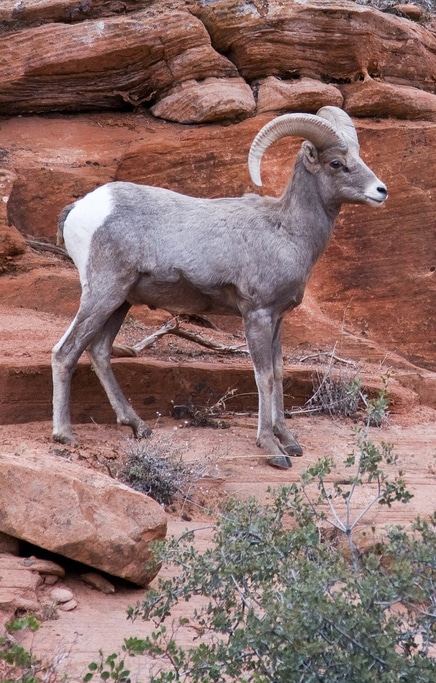 Desert bighorn are stocky, heavy-bodied sheep, similar in size to mule deer. Weights of mature rams range from 125 to 200 pounds (55 to 90 kg), while ewes are somewhat smaller. Due to their unique padded hooves, bighorn are able to climb the steep, rocky terrain of the desert mountains with speed and agility. Bighorn rely on their keen eyesight to detect potential predators such as mountain lions, coyotes, and bobcats, and they use their climbing ability to escape.[1]

Both sexes develop horns soon after birth, with horn growth continuing more or less throughout life. Older rams have impressive sets of curling horns measuring over three feet long with more than one foot of circumference at the base. The ewes’ horns are much smaller and lighter and do not tend to curl. The head and horns of an adult ram may weigh more than 30 pounds. Annual growth rings indicate the animal’s age. Both rams and ewes use their horns as tools to break open cactus, which they consume, and for fighting.[2]

The typical diet of a desert bighorn sheep is mainly grasses, sedges and forbs.

The desert bighorn has become well adapted to living in the desert heat and cold and, unlike most mammals, their body temperature can safely fluctuate several degrees. During the heat of the day, bighorn often rest in the shade of trees and caves.[3]

Southern desert bighorn sheep are typically found in small scattered bands adapted to a desert mountain environment with little or no permanent water. Some of the bighorn may go without visiting water for weeks or months, sustaining their body moisture from food and from rainwater collected in temporary rock pools. They may have the ability to lose up to 30 percent of their body weight and still survive. After drinking water, they quickly recover from their dehydrated condition. Wildlife ecologists are just beginning to study the importance of this adaptive strategy, which has allowed these small bands to survive in areas too dry for many of their predators.[4]

Rams battle to determine the dominant animal, which then gains possession of the ewes. Facing each other, rams charge head-on from distances of 20 feet (6.1 m) or more, crashing their massive horns together with tremendous impact, until one or the other ceases.[5]

Bighorns live in separate ram and ewe bands most of the year. They gather during the breeding season (usually July-October), but breeding may occur anytime in the desert due to suitable climatic conditions. Gestation lasts about 6 months, and the lambs are usually born in late winter.[6]

Information and Statistics from Texas Parks and Wildlife

The Sierra Diablo Mountains population, in Culberson and Hudspeth counties, is a result of two successful releases of pen-raised sheep, consisting of 4 rams and 3 ewes in June 1973, and 3 rams and 4 ewes in January 1979. This herd grew to an estimated 100 head in early 1989. It was supplemented with 3 rams from the Sierra Diablo Wildlife Management Area (SDWMA) pens in April 1988, and 28 rams and 8 ewes from the Area pens in October 1989.

The Elephant Mountain Wildlife Management Area (EMWMA) herd, in Brewster County, resulted from a release of 10 rams and 10 ewes on February 4, 1987. A supplemental release of 3 rams occurred in April 1988. All of these were pen-raised bighorns from the SDWMA brood facility. These sheep have since increased in number substantially.

The bighorns in the Sierra Vieja Mountains of Presidio County are the result of a release of 4 rams and 1 ewe from the 600-acre Chilicote Ranch brood pasture on March 16, 1987. More sheep were scheduled for release, but the attempt was aborted when the animals could not be trapped.

The Van Horn Mountains herd, in Culberson County, resulted from a release of wild-trapped bighorns from Nevada. In October 1987, 25 sheep, consisting of 5 rams and 20 ewes, were released. An additional 4 rams and 11 ewes were wild-trapped in Nevada and released in October 1988. A total of 22 of these sheep were fitted with telemetry collars to assist in evaluating the restocking effort. High predation losses to mountain lions and drought conditions initially resulted in a decline of the released broodstock. 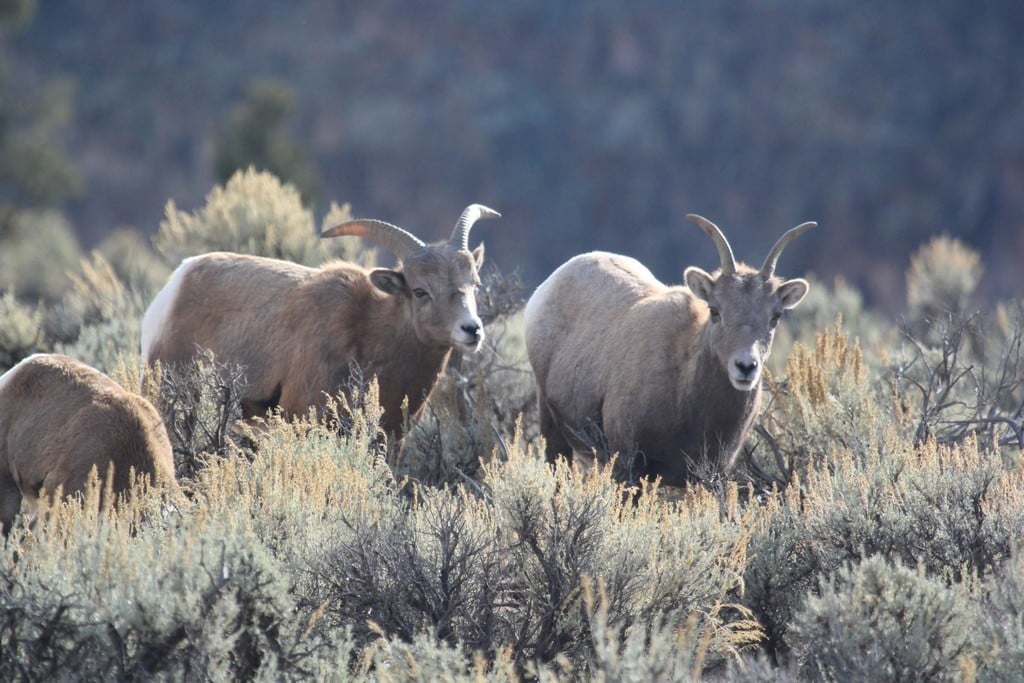 The Baylor Mountains herd, in Culberson County, resulted from a release of 2 rams and 8 ewes, which were wild-trapped in Nevada in October 1988. This release was supplemented with 4 rams and 7 ewes, in December 1988 from the Chilicote Ranch brood pasture. A total of 15 sheep released in the Baylor Mountains were radio collared to facilitate evaluation of the restocking effort.

The Beach Mountains, in Culberson County, were restocked in May 1991 with 26 bighorns, which were in a temporary holding pen on the Beach Mountain Ranch. These sheep consisted of 1 mature ram, 5 mature ewes, 13 yearling rams, and 4 yearling ewes relocated from the Sierra Diablo brood facility in December 1990, plus 3 lambs born in the holding pen. The Beach Mountains received an additional 12 bighorns from the brood facility in November 1992 consisting of 2 rams and 10 ewes. The sheep were placed in a soft release holding pen awaiting release. These sheep, plus 9 lambs born in the holding pen, were released in June 1993.

Wildlife managers have recognized the need for systematic surveys to determine desert sheep numbers and trends for many years. During the 1950s many techniques were introduced to determine bighorn sheep populations but most survey methods and census techniques were found to be inadequate. Desert bighorn sheep surveys improved through time as technology advanced. Fall helicopter surveys consistently produced narrower ram:ewe ratios, better correlation of fall lambs to annual recruitment, consistent sex ratios, reliable sex:age ratios, and increased total observations. Systematic desert bighorn sheep aerial population surveys did not occur in Texas prior to 1990. Annual fall helicopter surveys were initiated in West Texas during the fall of 1990. 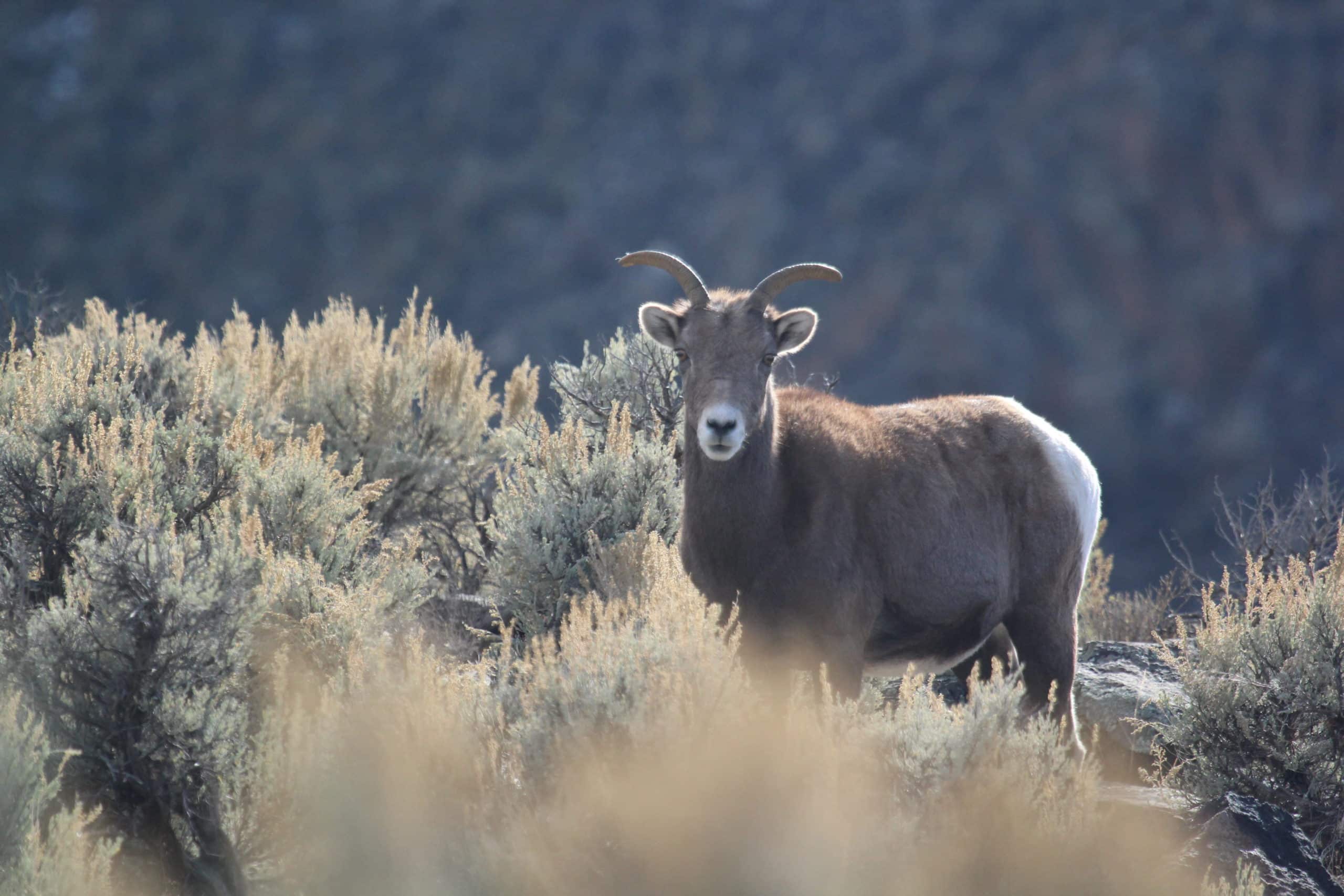 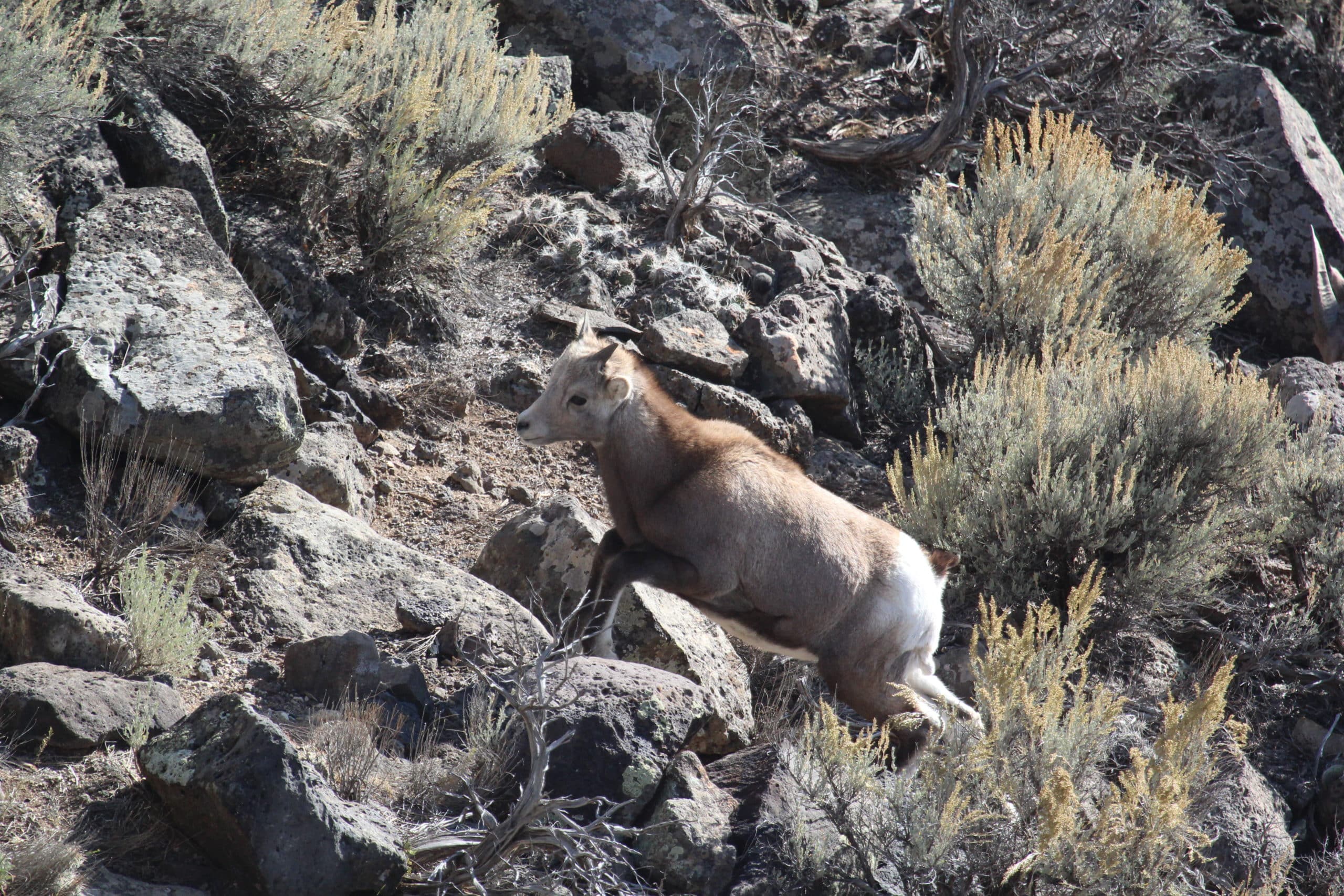 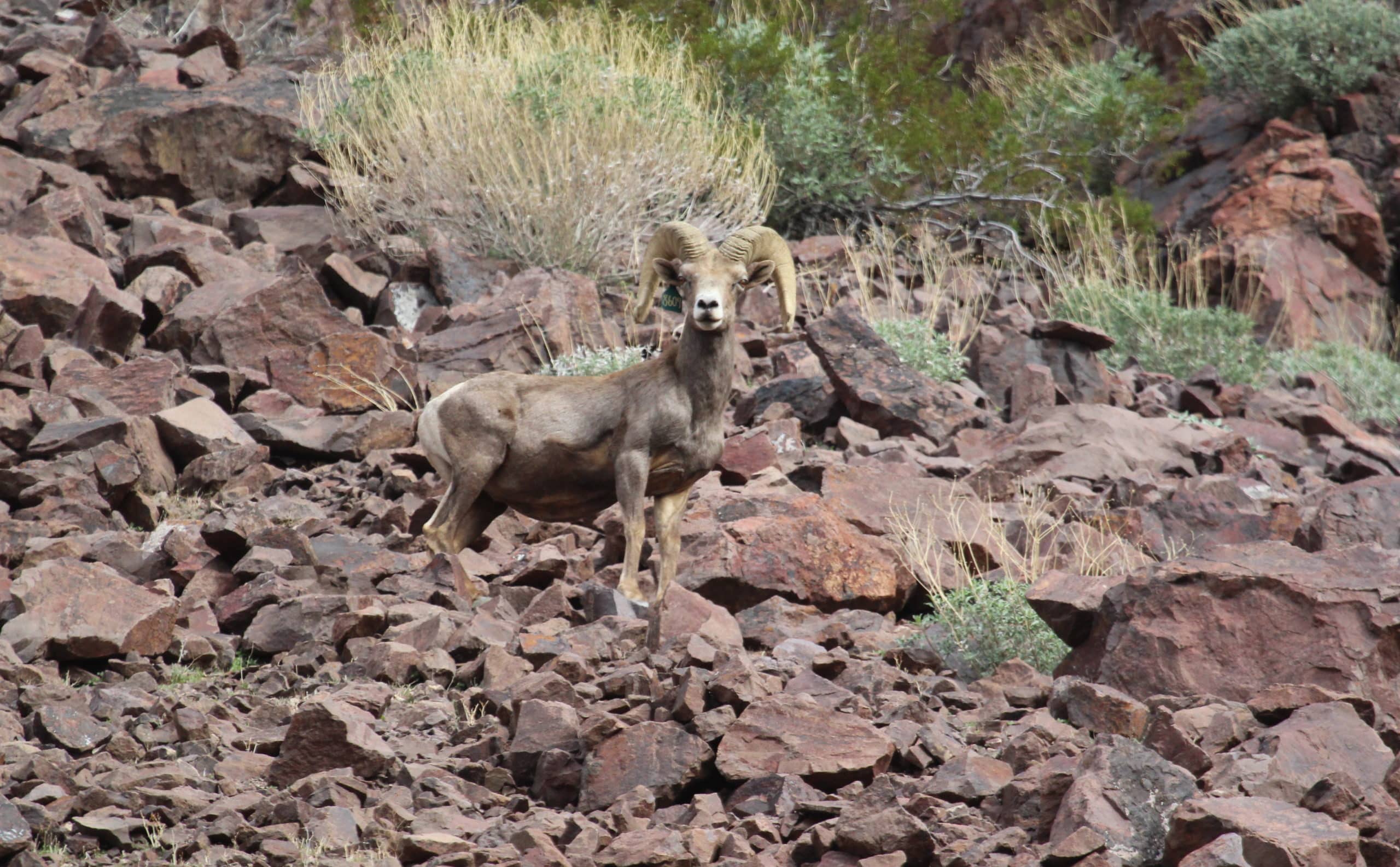